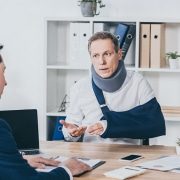 While this article may come as a surprise to many of you out there, for us at Dross Berman, it is just another day in the insurance world.  Last year, I had a client who was struck in the rear.  She pulled over to the side of the road, got out of her car to exchange information, and was struck by a drunk driver.  The drunk driver threw her body several feet, and she landed on the pavement.

An ambulance rushed her to Suburban Hospital, as she was unconscious at the scene.  Imaging at the hospital revealed multiple fractures, including a compound leg fracture, and a fractured spine.  Her injuries were dire, and required immediate surgery at UMD Shock Trauma.  Still unconscious, the attending physician ordered that she be transported by helicopter.

A few weeks later, while still an in-patient at UMD Shock Trauma, she received a bill for $37,000.00 from the helicopter company.  It was submitted to her health insurance, Blue Cross/Blue Shield for payment.

About a month later, she got a denial from BC/BS.  According to them, the helicopter transport was deemed “medically unnecessary.”  After a round of internal appeals, the claim remained denied, and a lawsuit was initiated.

I was so shocked by the way BC/BS was treating my client, that I issued a press release.  A news organization contacted me, and stated they ran a very similar story only a couple weeks before I contacted the news outlet.  Basically, this happens all the time.

Motor vehicle insurers are not the only insurers who are bad actors.  I see health insurance and homeowners insurance do horrible things to their policy holders every day.  Unfortunately, without serious reforms, this type of behavior will continue.